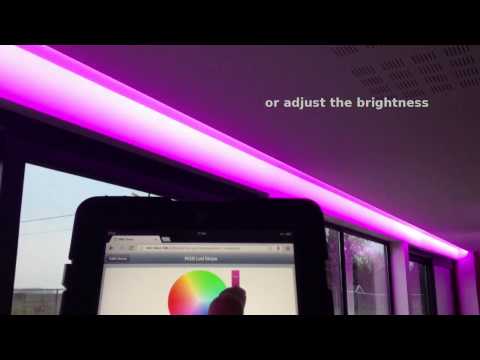 To use the DMX binding, install the core bundle and one device interface bundle and add binding information to your configuration, then define appropriate connection details.

If you use the OLA interface, you will also need to configure OLA. See “Installing OLA” below.

The binding can be configured in the file services/dmx.cfg.

repeatMode may take any of these values: always, never, reduced.

DMX channels can be linked to switch, dimmer and color items.

The SFADE (Suspending Fade) command is very similar to the FADE command. It differs from the FADE command in that it suspends any active fades before executing a new fade. After the fade has completed, the original fade which was running before the SFADE started is resumed. It accepts the following parameter structure(s):

The same binding could also be written as:

As a quick reference, an example installation is described below on how to install OLA on a Raspberry Pi running Raspbian Wheezy and configure it for use with an Entec Open DMX USB dongle.

For detailed instructions on how to install and configure OLA on different platforms or with different devices, consult the OLA documentation.

After saving the file, install the binaries with the following commands:

When prompted whether to start OLA at boot, select Yes.

Depending on how OLA was installed, the OLA configuration files for the devices and protocols will be in the directory /var/lib/ola/conf/ or ~/.ola.

and add the following rule:

Restart the Raspberry to start OLA.

To use a custom interface rather than OLA can be easily achieved by creating a new osgi bundle which implements the org.openhab.binding.dmx.DmxConnection interface.

To use, simply deploy the core dmx bundle and the custom interface bundle.

Starting with 1.9.0 you can configure how often the output will be refreshed. Every 35ms the binding checks whether one of the channels has changed. If this is the case, the new values will be sent to the configured output. If none of the channels have changed, prior versions of the binding never sent updates. This works in most cases, however it is not compliant with the underlying standards (not sending updates for 1 second is considered as DATA LOST in the E1.11 standard; the receiver behaviour for this case is not defined).

If using a directly connected interface (e.g. RS485), stay with the default value of always. If using ArtNet, use the reduced option and minimize network load.